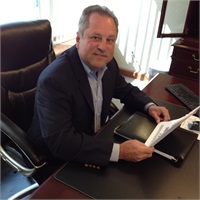 Mr. Dochinez began his securities career in 1982 when the opportunity arose during employment with Prudential Insurance. He formed Trustmont Financial Group in June of 1986; investment advisory services were divided in 1992 with the creation of Trustmont Advisory Group. Peter’s Certified Financial Planner designation was earned in 1995, and he obtained a Direct Participation Professional (DPP) designation in 2012. For many years, Mr. Dochinez has focused his efforts on the private placement of investments in such areas as Real Estate, Oil and Gas, and early stage Corporate Funding Strategies.

Through his career, Peter has qualified, for numerous securities licenses, including 6,7,24,27,53,and 63. He has served as President, Chief Compliance Officer, Chief Operations Officer, and Anti-Money Laundering Principal for both Trustmont Financial and Trustmont Advisory Groups (many concurrently). In 2013, he partnered with Joseph Sinclair and Patty Eutsey to form PWR Planners with the goal of developing an exceptional, well-rounded Team of Financial Professionals to serve a select group of clientele.

Peter currently allocates a reasonable portion of time serving on various industry related boards and committees as well as retaining chairmanship of Trustmont Advisory Group. Despite his schedule, Pete still manages to find time to involve himself in the community as a member of the Rotary Club, in addition to maintaining Primary Sponsorship of the Forever Fund and serving as an Executive Committee Member for Taste the Good Life which promotes local/regional 501(c)(3) organizations. He is also an Equity Partner in Ferrum Capital/West Penn Regional Center and consults with both project managers and investors about the USCIS EB-5 Visa Program.

Peter and his wife, Claudia, have been married over 30 years and have two adult children. He enjoys gardening, fishing, hunting, and golfing. His personal motto is, “Get it done. Get it done right. And get on with something else.”